Location: We work in Northern Tanzania, specifically in the District of Longido, which stretches from the slopes of Mount Kilimanjaro in the east to Lake Natron in the west and Kenya to the north. It’s a beautiful savannah area comprising many of the stereotypical images of Africa, including the striking, colourfully-dressed Maasai and a diversity of wildlife. Our operations are based in Longido Village, where we have an office, and where Sauti Moja’s Africa Program Manager is based. 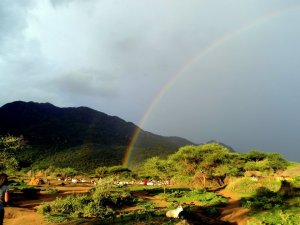 Environment: The environment of Longido District varies from arid to semi-arid, with low, seasonal precipitation. However, droughts are increasing in frequency and severity. With only a few exceptions, the environment is not conducive to production of food crops. Pastoralism – a livelihood that almost completely depends on livestock – is the dominant way of life in Longido.

Culture: The Maasai are an indigenous group in Tanzania facing immense challenges and are desperately trying to preserve their distinct culture. While cultural distinctions between ethnic groups have largely dissolved throughout other parts of Tanzania, the Maasai have defied this trend. Relatively-speaking, they have resisted the pressures of globalization, Western influences, and accompanying values. Nevertheless, their culture remains dynamic, as they delicately manage preservation of their identity and social change.

The Maasai maintain many different values and customs, which often provoke prejudice from Westerners and the dominant groups in Tanzania. This prejudice characterizes the “development” existing in their communities and the services being provided by state and/or non-government agencies (e.g. hospital, school institutions, etc.). This compounds their vulnerability, exacerbating the challenges they already face.